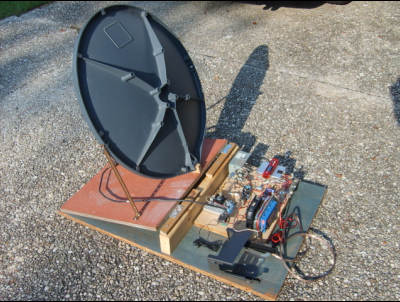 There are not many microwave enthusiasts in North West Florida, or if there are many (more than me alone?), I have not found them.

When I started talking about making a 10 GHz transverter at my local radio club, there were a few people interested, but nobody was interested enough, or had enough time, or enough material to actually consider building one.

So I decided that if I were going to do something on 10 GHz, I probably should think about building two transverters, and I started thinking about everything in quantity of two. That means two VHF-SSB rigs, two microwave bricks, two mixers, two filters, two sets of relays, antennas and all the smaller stuff that is not easy to find, such as coax-waveguide adapters, SMA-BNC adapters and the like.

One of the immediate advantage of building two transverters, aside from being able to have a QSO (with yourself?), is that it is a lot easier to check out a radio (in general) if you have another radio operating on the same band and mode.

Both transverters do not have to be at the same level of power and sophistication, and in my case, while both transverters are similar in concept and material, one is a high power unit with a significant antenna (10W into a 2' offset dish), and the other is a low power unit (~100mW) driving a small horn. The smaller unit draws low power and is easy to carry around, so it makes a handy monitor, even if you do not use it for QSO. The low power could probably do CW, but it is not geared towards sending CW efficiently, the high power unit is.

The most significant cost was the IF rig. I already had an FT-290MK2, which is just about perfect for the task, but along the way I developed an interest in VHF/UHF operation, and the lowest cost for getting on the bands other than HF or 2m was an FT-817. So I bought a used FT-817 and started using it on 6m and HF portable, and it does a fine job as an IF rig also.

Let's talk about the transverters themselves. There are many ways you can get on the microwave bands, 10 GHz in particular. One of the most obvious is to go out and buy a commercial unit from SSB Electronics or Down East Microwave. Another is to build a transverter from scratch from the articles in QST by Zack Lau W1VT. Finally, probably the most popular is to build one from surplus parts. If you select the 3rd option, eBay will be your friend, you will have a steep learning curve, you won't be the first one on the air, but you will have a lot of fun and lots of rewards in knowledge and satisfaction.

With regard to not being the first one on the air, my transverter building experience was almost 10 years in the making, from the time I bought the first components, the microwave bricks.

If you are in a hurry, check the links at the bottom of this page.

But enough small talk, let's look at the hardware design. The block diagram is below: The IF rig I normally use with this transverter is a Yaesyu FT-290MK2. It is settable to high power (25W) and low power (5W). I use it in the low power mode of course.

To drive the mixer in the linear region, you need not more than 1 mW (0dBm) in the IF port. That's what you will need for SSB. For CW, you could run 3 to 5 dBm into the mixer and get a little more output power. To get 1 mW, I had to attenuate the signal level by about 37 dB.

I achieved this by using an OEM attenuator pad rated 5W and 30dB, and provided the additional attenuation by placing R1 between the attenuator output and the mixer. R1 is adjusted to get just the right drive level. See notes for tips on how to adjust levels.

There are a couple of unusual details about the design of this transverter.

Note that the antenna is mounted on a hinged piece of plywood, so I can easily adjust the elevation. The semi-rigid cable connecting the antenna is flexible enough to give me 20 to 30 degrees of range.

Here is an illustrated view of the electronics: 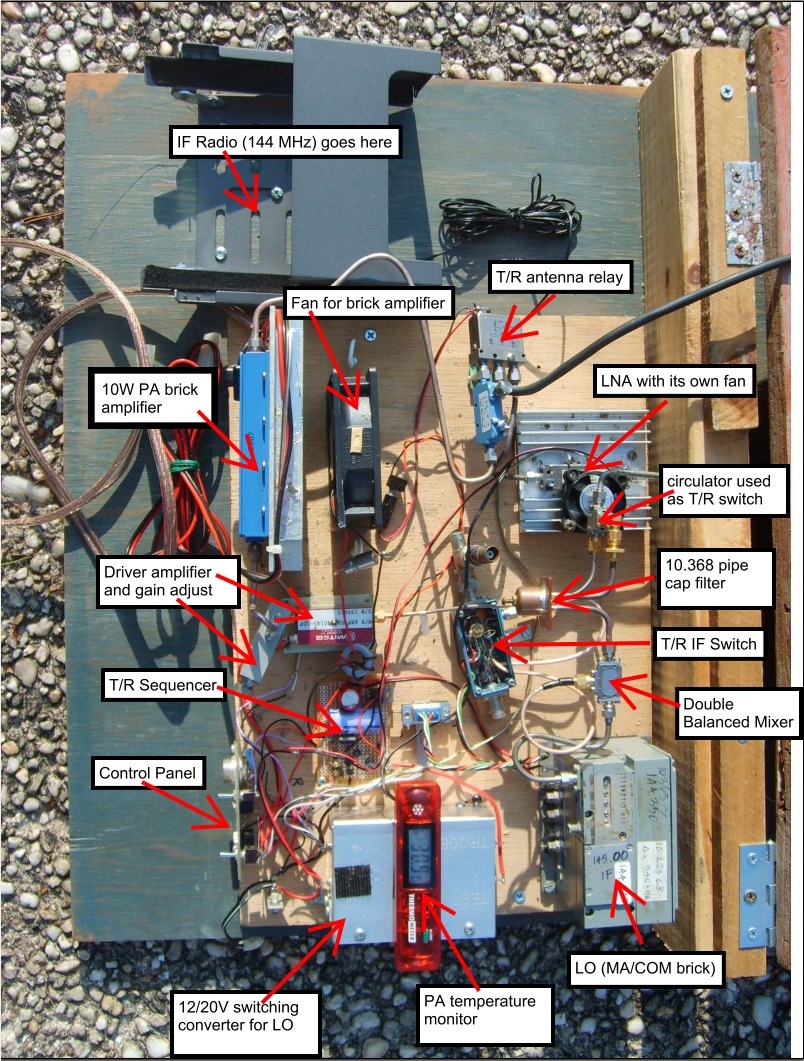 Both transverters are essentially the same, with the important difference of the 10W brick amplifier (I was lucky to find one, I do not expect that luck to repeat itself). Also, the *big* unit has a 2 foot offset dish (with probably ~40dB of gain), the small unit has a small horn with about 15 dB of gain. The small horn was made with brass sheets and a short length of WR-90 waveguide and a flange. I do have a Ku band satellite dish that my neighbor trashed, and I anticipate using it with the small transverter. Finally, the DC/DC converter powering the brick oscillator does not have the same shielding and filtering as the other transverter, so that unit is a little noisier in the lower HF bands, even though the noise does not extend to the VHF range..

Here is the test/monitor transverter: 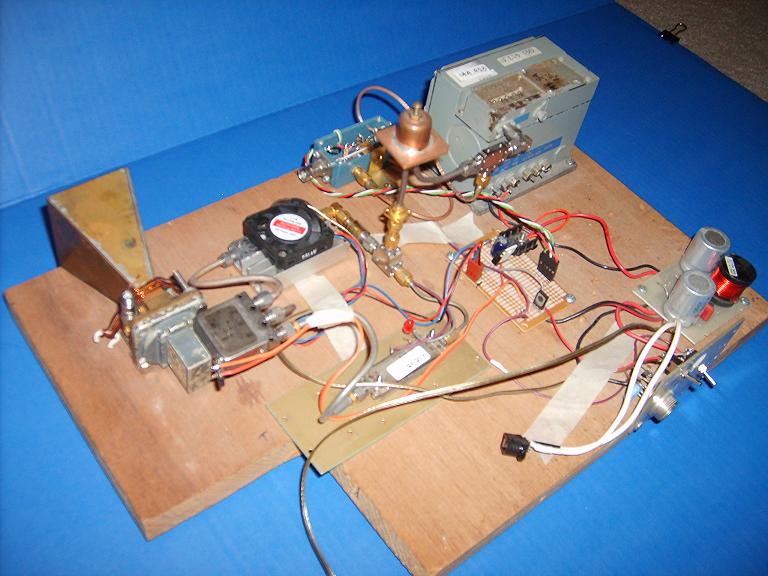