This Tek 494P spectrum analyzer had a 1st LO phase lock error. This is how it works and what I did to fix it. 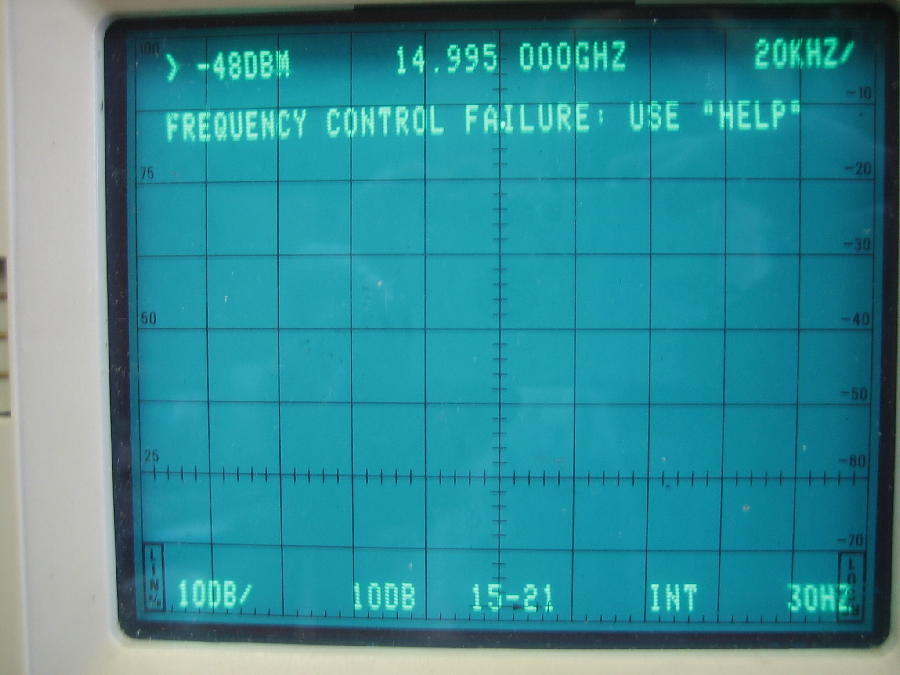 The 1st LO in all the 49x series of spectrum analyzers is a YIG oscillator, driven by DACs in the range of about 2 to 6 GHz or so (narrower range for the 495 and 496). The 494 has a PLL system to lock the YIG oscillator to an harmonic of a ~5 MHz oscillator, and a separate counter to resolve which harmonic the YIG is actually locked to. If the YIG is locked to the wrong harmonic, the processor cranks up or down the DAC driving the YIG until it is locked to the right harmonic.

This scheme is very similar to the one used in the 492 (with Option 3), except that the 492 does not have the counter and therefore does not know which 5MHz line is used. So, while it can phase lock its 1st LO and provide good stability while using the 100Hz filter, the 492 (Option 3) is unable to tell you what frequency you are looking at with an acuracy better than 5 MHz. On the 492, the center frequency display has a 1MHz resolution and can be off by several MHz. On the 494, the CF display has up to 10Hz resolution and once the OCXO has warmed up, it will typically be acurate to within 1kHz or better.

Normally, the phase lock is only used to resync the YIG during retrace, between sweeps, making troubleshooting difficult as the phase lock signals are not present all the time. The 494P has a very useful troubleshooting mode where you can lock it in a specific mode during which the instrument is not sweeping and where you can observe signals with an oscilloscope and take measurements. The screen also displays very useful information in these modes.

In my instrument, the phase lock was "kinda sorta" working, in that it would bring the 1st LO frequency to within about 10-50 kHz of the desired frequency, but besides being off by these 10-50 kHz, the frequency was wobbly, preventing the use of any filter narrower than 10 kHz.

From information gathered from members of the TekScopes Yahoo group (mainly John Miles KE5FX, thanks again for your invaluable help), and a service manual from AA4DF, I checked the YIG oscillator itself (sometimes filtering capacitors or a relay on the YIG filter board can go bad), but that was not the problem. I checked connectors and supply voltages but everything was OK. I then suspected the Phase Gate, a coupler/mixer/amplifier assembly that drives the phase lock system, because the output seemed low. I bought one on eBay just in case. While waiting for it, I checked other parts of the circuit and I then found out that the 25 MHz VCXO that is part of the phase lock circuit was not locked (the output of the error amp was stuck low). It turned out the phase detector of that circuit, a 74LS74 was bad.

After replacing it, the 1st LO is now working just fine.

Here are a couple of plots of the phase noise, plotted with John Miles' excellent PN program.

Please note the green plot shows a large rise at low frequency because the plot was taken with the 100Hz RBW filter, so the data below ~1kHz is not valid.

For information, I have plotted the noise from my HP 8673M synthesizer on the Tek 494P (1st plot, created with John Miles' excellent 7470.exe plotter emulator software) and on a Tek 492 (screen shot since it does not have a GPIB port). The difference in reference level is to account for the lack of vertical calibration on the 494P at the moment due to a blown input attenuator. Phase noise is very similar, except for a small pedestal close to the carrier on the 492. 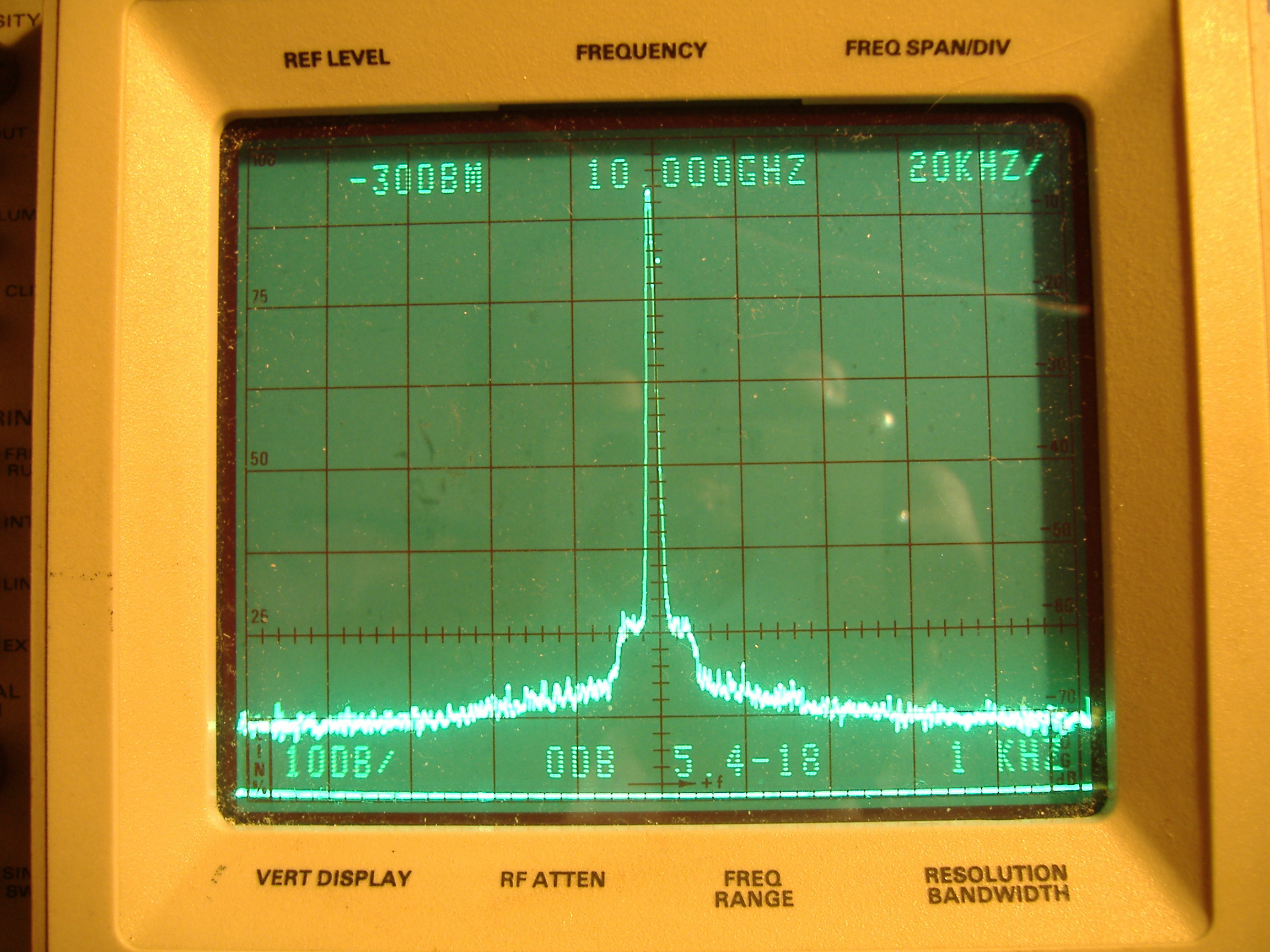 Here is a picture of the 20dB step attenuator element that was blown up in this instrument. You can see the thin film resistors on the right hand side are blown up. The element is about 5mm (3/16") long. The symptom was that for any attenuator setting where the 20dB pad was involved, the attenuation was less than it should have been by about 5dB. I used an ohmmeter on a high scale (Fluke 8860A on the 20 kohm scale) to make sure I would not damage the mixer and found out that on the 20dB attenuator setting, the input resistance was about 200 ohm instead of 50 ohm.

This was consistent with a blown attenuator. I ordered a new one from Deane Kidd (dektyr@teleport.com) which was shipped very quickly, allowing me to complete the repair of the instrument.

Replacing the element was not difficult but painstaking because of the number of small screws involved and the need to readjust the attenuator mechanically. There are a number of adjustment screws to account for small mechanical differences between attenuators and I have not found an adjustment procedure for the attenuator itself in the service manual.