I started a collection of HP, Tek and Fluke test equipment a few years ago. Pretty soon, the desire to do something with the GPIB (also called IEEE-488) connector on the back of most of these instruments drove me to action.

Some of the applications of computer control include: plotting the frequency response/insertion loss of filters or other devices, and logging data at specified time intervals for instance.

Plotting is done using a signal generator and a power meter, for instance. The computer sets the generator to a specific frequency, then measures power, then the frequency is increased and the process repeated until the desired frequency band is covered. During the process, the data is stored to a file. Another program can be used to display the data. That could be a simple spreadsheet program such as Microsoft Excel, or a custom plotting program.

Logging usually involves a single instrument, such as a voltmeter, a frequency counter or a thermometer for instance, and data is collected at specified time intervals.

The first step will be to get the data in and out of the instrument, and that will require a GPIB controller of some sort.

GPIB, HPIB, IEEE-488 refer to the same interface, originally developed by Hewlett-Packard for their test instruments, and later officially released by the IEEE as IEEE-488. In the mean time, as the bus became well known and customers were asking for it from HP's competitors, other companies used the acronym GPIB so that they could refer to it without endorsing HP...

In this page, I will use the term GPIB because it is probably the best known. It seems that the GPIB interface will eventually go away, being replaced in newer equipment by ethernet and/or USB ports, which have much greater data rate capability, even though the GPIB bus has the advantage of being able to simultaneously trigger multiple instruments, something that can be approximated, but not yet replicated, by the other topologies.

There are 3 basic types that I am familiar with.

I like the serial controllers because they are inexpensive and don't require to go inside the computer. They can easily be swapped from one computer to another and work well with laptops, which cannot use an AT or PCI internal controller. Finally, serial controllers do not require low level drivers or special libraries when you write software for them (however they will require custom user level code in most cases).

Serial Controllers have a disadvantage for some applications: the data transfer rate is less than most other types, which is not a problem when controlling signal generators, or reading from a frequency counter, but may slow down the process of downloading a lot of data from a spectrum analyzer for instance. USB is quite a bit faster (even though the earlier Prologix internally used serial communication, the latest model pictured above uses a fast parallel interface) but the speed champs are the PCI types of controllers. AT controllers also will be faster than most other types, except for the NI and MCC USB controllers with their proprietary drivers.

If you want to control more than one instrument, or if you use a Serial or AT/PCI controller, you will need one or more GPIB cable(s).

Standard GPIB cables are designed with male/female connectors at each end, so they can be daisy-chained from instrument to instrument, and finally to the controller. 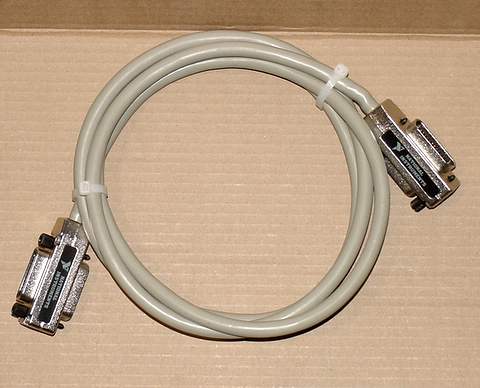 Industry standard GPIB cables are very stiff and expensive when new, but cheap (yet, still stiff...) when bought on eBay.

I have bought several cables on eBay, but I also make my own cables using ribbon cable and IDC connectors (Insulation Displacement Connector, also called "crimp connector") from Digikey (male connector is P/N: MDC24K-ND, female connector is P/N: MDF24K-ND, they cost about $5.50). It's not much cheaper than true GPIB cables from eBay (if you only control one instrument), but much easier to daisy-chain from instrument to instrument, and definitely cheaper if you have many instruments. 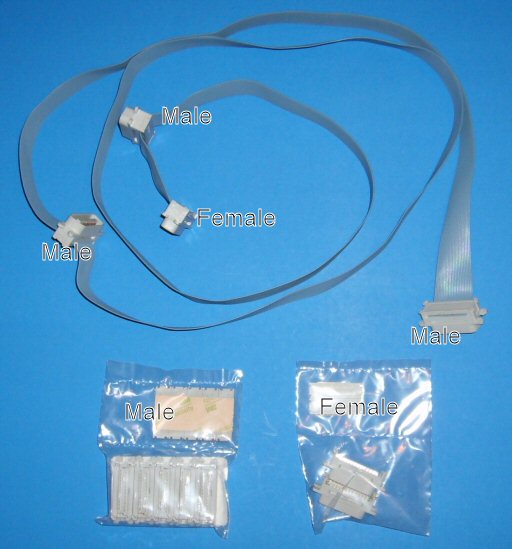 If you make your own cable, don't forget to buy at least one female connector, even if you don't think you need one for your cable. Unless you have the official crimp tool (quite expensive), you will need one to crimp the male connectors to the cable without damage using a small vise. On the other hand, putting a female connector at one end of the cable will allow you to add an extension later, and if you use one of the Prologix, Softmark, MCC or NI USB-GPIB controllers, you can plug it here to control multiple instruments.

Of course, you also need some software to get the data into the PC. Let's quickly pass over National Instrument's LabVIEW, which is very nice but definitely not priced for the hobby market at $1,200.00 for the base version (even older versions on eBay sell for more than most GPIB controllers). I doubt that LabVIEW supports inexpensive controllers such as the Prologix or the Softmark USB-GPIB controllers.

If you are only interested in getting data out of an instrument such as a scope or a spectrum analyzer, John Miles has written a very nice, free HP 7470 Plotter Emulator

Another option if you want to download data from a Tek digital storage scope is Tektronix Wavestar, a commercial application made by Tek. As of 12-16-06, the cost from Tektronix was $330.00. You can download a free, 30 days product evaluation copy from the Tektronix web site. I am not sure which adapters are supported. It's likely the Prologix and Softmark are not on the list. The Tek Wavestar software also supports serial interface, for the Tektronix instruments that have this interface. It does not support serial GPIB controllers from NI, IOTech or Black Box. If you have a Tek scope with a serial port, this is an easy (if not cheap) way to get data from the scope into the computer.

If you want to control instruments such as signal generators, you can try a free program called EZGPIB by Ulrich Bangert. It includes a Pascal scripting engine which may allow you to do what you want without having to buy a Visual Studio development system or some other compiler.
While you won't need a compiler, you will still be required to write code for the scripting engine. There may be other such free software, but I have not come across any. I am not sure which GPIB controllers are supported other than the Prologix. Ulrich has also written another piece of software called Plotter, which is a very useful tool to display data in graphical format and can be used for timing analysis.

I have started working on GPIB Control software to take advantage of the GPIB ports on my instruments, and while not quite ready for prime time, it is usable (at least for me). For now, this software only supports the BlackBox and IOTech RS-232-GPIB controllers, but I am working on the Prologix controller. This software supports a number of instruments (right now, HP 8656A, HP 8657B, HP 3478A, HP 5316B, HP 5334B, HP 5370A, HP 8672A, HP 8673M, HP83640, HP 3586A, Fluke 8860, HP 59306A, HP 59307A, HP 436A, HP 437B) with more coming. Functions that are supported are of two types: Plotting (such as sweeping the frequency of a signal generator and measuring power with the HP 436A or the HP 3586A for instance) and Logging, where data from a voltmeter, HP 3586 or counter is collected at a given periodicity (from a fraction of second, when practical, to many minutes). The program supports the equipment listed above. Logging can also automatically scan the HP 59306A or HP 59307A switches to log multiple channels with a single instrument. I believe it would be simple to add other instruments once I look at the commands. 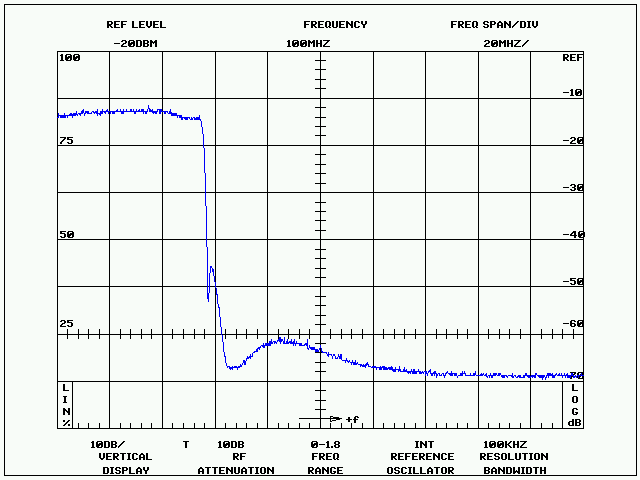 My program will be placed on this site when it's close enough to be usable by people who don't want to or can't fire up Visual Basic as soon as something unexpected happens...

For information on computer languages that can be used to control equipment via GPIB, check Brooke Clarke's page (Ref 11).